The Danger of an Examined Life 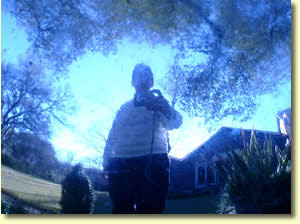 I was reading the May 28th issue of "The New Yorker" and there was an article about Gordon Bell. Let's just say that in the interest of software or self-indulgence and, I guess, his job as a researcher at Microsoft, Mr. Bell is recording almost everything in his life. Past and present...it's being scanned, photographed. He wears this camera around his neck that senses light changes and takes a picture.

Now, Socrates, I believe said “An unexamined life is not worth living." But really.

Bell's initial epiphany was that scanning and photographing would let him let go of paper and objects. But there is this ongoing question of saving this stuff in any form.

God knows (if he exists and is paying attention) that I've tried to record my life. Sometimes obsessively. In cyberspace I have, from time to time, posted journal entries every day which included my mood assessment, my exercise routine, what I ate and how I filled my time and, privately, filled many journals (especially making records of travels) and KBs of disk space recording what I have done. I've made databases of books and people. I've recorded all my spending for embarrassingly long periods of time. I've even scanned in scraps of paper with my doodles on them. When I'm not making a record of my life, I feel a little lost in it. But clearly it can go too far. And this article is a witness to that.

Knowing how much to try to record or for that matter remember of one's own life, is a crazy science.
Posted by Linda Ball at 10:18 AM No comments:

Anniversaries do it. Evoke memories, that is. If James Joyce was capable of thinking of marketing, he would have realized that he would mark June 16 (1904) for the literature set. Bloomsday.

For those following along, I've been toying with the idea of reading Joyce's Ulysses myself for a while. I prepared. I bought Stuart Gilbert's 1930's exposition on it in a Paris bookstore (The Village Voice). I read it, too. Mostly in the bathroom if you must know. It took almost two years to get through it. I shook my head at the untranslated French and Greek thrown about. I read The Portrait of the Artist as a Young Man. I watched movie versions of Artist and Ulysses. I read various biographical and explication materials. I read a prose version of The Odyssey, translated by T.E. Lawrence (Lawrence of Arabia).

Yesterday, I decided the time had come. I would read James Joyce's Ulysses. I would carry it to the gym for the bike and take it any time I needed reading material and didn't take newspapers. And I did. I'm a few dozen pages in.

In 2004, I visited Dublin. I flew over alone and met a friend who had been visiting Edinburgh, her place of birth, from her home in Cape Town. She helped me seek out the plaques embedded in the sidewalks marking spots from Ulysses, went with me to places like the James Joyce Cultural Center and sat with me while I had a pint at Davy Byrne's pub. She even talked a friend of her son's who took us out for a drive into going to a Martello tower that houses a museum of some sort. (We didn't get to see inside because it was closed, but I was thrilled to see the tower.)

So the day (June 16th) makes me think of Joyce's book. And the copy of the book I chose to actually read (I found three in my piles) was one I bought in Dublin. I thought of my friend. How one day on our visit to Dublin she had awoken with a swollen eye. And how we would much later learn that it was a symptom of her breast cancer once again rising up in her brain. My friend is in perhaps her last battle with her disease now. She's far away in Cape Town. But every day that I read my Penguin Classic version of Joyce's book I think of her.

Dates and places have power to evoke memories. From June 16th to Dublin to Cape Town. We joked about the swollen eye, called it the "Dublin Eye" when the symptom came and went and bedeviled her before it was known that it was an announcement of what might spell her doom. Our joke was a sly reference to the London Eye which is really a sightseeing ferris wheel. Which I visited in a break from a business trip in 2002 while my mother was in a hospital dying. I was melancholy on the trip but I bought a souvenir picture of myself on the London Eye to show my mother who was eager to hear about the trip and ask for souvenirs.

And now I've arrived back to my mom and her cancer: Multiple Myeloma. And I think of my friend who is waging a valiant battle against it.

Chains of memories and thoughts, unbidden and sometimes unwelcome. It's how we operate. From the date June 16th and off into the world of fiction and then into the facts of our lives.
Posted by Linda Ball at 12:08 PM No comments:

The Politics of Eating 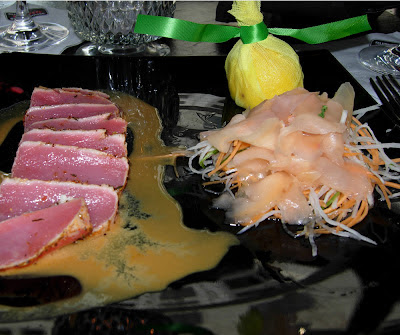 Restaurants are eschewing bottled water because of the high cost of containers and shipping and going so far as to filter tap water and infuse water with carbon dioxide for the sparkling drinkers.

Here in Austin, there are those who are up in arms that the owners of Las Manitas got a forgivable loan to move their restaurant out of leased space. (Particularly irate is the barbecue joint owner whose place burned down when, with a fire station within spitting distance, the dispatcher decided that the 911 caller couldn't be serious..."they must just be smoking some meat." He got no help from the city in rebuilding his business even though, as a taxpayer, he should have surely had some expectation of fire protection.) Right on the Avenue (Congress Avenue) we will have two politically fraught choices when we move downtown (assuming they both last). Las Manitas ("Avenue Cafe") with their undeserved boost from the city and Jezebel, proudly serving foie gras...even for dessert. I've made my choice. I used to dine at Las Manitas occasionally and encouraged outlanders to try it for the local flavor and possible celebrity sighting. No more. I'll be eating foie gras down the street, even if I have to elbow some protesters.

I'm wondering, too, about the unintended consequences of the other movements. Where will the displaced long distance truckers and water bottling plant employees get jobs? While I try to buy locally made groceries from time to time, will sales of some things be adversely affected? Long term these movements do good. With the exception of the foie gras thing. I just wish they force fed ducks nearer to home. (Methinks they use ducks, not geese, these days. At least in the U.S.)

Tuna, I think, is the subject of much controversy, too. We are fishing them into extinction or something. But doesn't that plate of seared tuna look good? And if we are to truly eat locally wouldn't that really limit the fish we'd have in Central Texas? I love fish. It's supposed to be good for me. Locally we might get some catfish. A questionable bottom feeder that seems best fried.

Yeah. Eating has consequences. And it's political. But I think perhaps unintended consequences abound.
Posted by Linda Ball at 4:23 PM No comments: