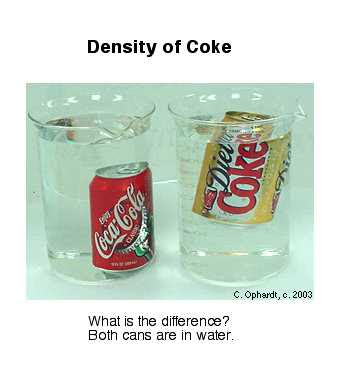 I ripped off the illustration from here. (Apologies Elmhurst College Chem Lab.) And really this post isn't about the density of the product. Although isn't that fascinating? No, I'm really going to riff on this New York Times piece.

This study found a correlation between consumption of diet soda and metabolic syndrome, a collection of factors that indicate an increased risk for cardiovascular disease.

A couple of things about it make me say 'hmmm.' First, I'm not surprised that people who may have a little extra fat around the abdomen are tempted to drink diet drinks. Second, I'm surprised that the scientists are really musing about it in this way.

“Why is it happening? Is it some kind of chemical in the diet soda, or something about the behavior of diet soda drinkers?”

Well, the chemicals, if consumed in large quantities just can't be good for you. Your body must record them although the consumer writes 'zero calories' in his mental ledger. But mostly, don't you think, it's just that people are trying to hedge eating fried chicken by drinking them? That the doctors have worried them into trying to lose weight? That they are shamed by society to be seen consuming a full-blown, sugar-laden, twenty-six ounce soda?

It just seems that this study is drawing this one trivial conclusion that grabs the headlines and obscures the rest of the study. Which belongs in the (non-existent as far as I know) Journal of Completely Predictable Results. You know: the more fried food you eat, the more the risk. Unless one day they discover, that, nah, it was all the fault of diet soda.
Posted by Linda Ball at 8:36 AM No comments:

We wouldn't like ourselves if we owned a journal called "The Journal of Unintended Consequences" and we didn't comment on Heath Ledger's death. Did he intend to die? Who knows. Did he misuse and combine powerful prescription drugs? Definitely. Does it matter than some doctor prescribed them. No.

These drugs have warnings. A third grader (who may be stealing them from Mom and Dad's stash but that's another story) knows the warnings. There are warnings about dosage and combination.

Unintended consequences? Maybe. Maybe he intended to live. But he definitely knew that he wasn't taking drugs as prescribed by a competent caring doctor. Please.

I'm the one, of course, that was circumspect when a professional advised 600 Mg. of Ibuprofen as a dose for pain. Because it is 50 percent more than recommended on the (over the counter) pain reliever.

It's best if you pay attention to what you ingest, its side effects and warnings. Otherwise you and yours may be whining about unintended consequences.
Posted by Linda Ball at 2:59 PM No comments: