I can't believe the JUC missed this story when it first came out. So in these dictatorial societies where polygamy is practiced, eligible women are in short supply. So you force young men out of the society by damning them for things like watching movies and wanting to go to school.

Personally, I don't think the government should dictate relationships, but this just goes to show you that probably, if there is a higher being, he didn't intend for men to have a bunch o' wives.

In other God Math news, did you ever wonder if those suicide bombers who believed they were getting scores of virgins in heaven also thought they they might be sending some of those virgins to heaven by there indiscriminate bombing? And isn't it convenient that only some guys get the multiple virgins? Because if they all did then no matter how many virgins got killed the numbers wouldn't add up soon enough.

The JUC is just saying...we believe in math. Hard to argue with it.
Posted by Linda Ball at 1:05 PM No comments: 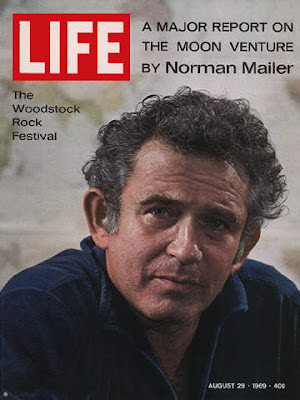 There are things we can do to upset married life. You know those little nagging things that add up and split people up. Of course, women can be so tolerant. Norman Mailer (pictured here on the cover of the August 29 LIFE magazine) recently died. In The New York Times obituary (November 11, 2007) there is this paragraph:

In November 1960, Mr. Mailer stabbed his second wife, Adele Morales, with a penknife, seriously wounding her. It happened at the end of an all-night party announcing Mr. Mailer's intention to run in the 1961 mayoral campaign, and he, like many of his guests, had been drinking heavily. Mr. Mailer was arrested, but his wife declined to press charges, and he was eventually released after being sent to Bellvue Hospital for observation. The marriage broke up two years later.

Well, um, that's so rich, that paragraph! Does the Times' habit of giving everyone a honorific even when describing the most despicable deeds make this sound funny? Is there a tone of excusing stabbing your wife if you'd announced a political move and, after all, just drank as much as your buddies? She did give up on him, though. (Or he her?) After two years. Then, of course, one ponders what would have happened if she had died. If she hadn't been around to forgive this tiny transgression in spite of his 'seriously wounding' her?

I'd always known Mailer did this (stabbed one of his wives) but this description in the Times really brought a flood of thoughts of the unintended consequences of domestic violence, living or dying after an assault and, of course, of running for political office.
Posted by Linda Ball at 8:25 AM No comments:

Overweight and Proud of It! 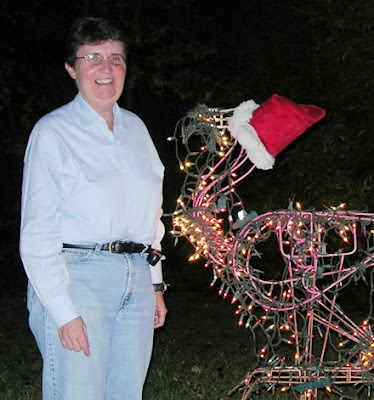 This was taken last year. Around the holidays obviously. (For those of you following the downsizing saga over at Visible Woman, we sold the decorations.) Anyway. The JUC has trouble resisting comment on certain stories and one of those came out today. Seems there was a scientific study of the effect on mortality of being at certain weights. Overweight means a BMI of 25-30, I think. Mine's around 27 I bet. (I did have it tested once. Okay maybe 28.) I'm 5'6" and 162 pounds, more or less. I'm actually probably shorter now. You shrink! Gravity! No fair! Anyway. This juicy story, from some scientists with too much time and data on their hands was reported in newspapers around the country today. See The New York Times.

Bottom line is that being overweight according to current standards (not obese) might make you live longer. They don't know why, of course. Now the only question we have here at JUC is how to make the money last!
Posted by Linda Ball at 5:15 PM No comments:

I know you all had laughs over Dick Cheney shooting his hunting partner. But did you hear that a guy in Iowa got shot by his dog the other day. That is way funnier, I think. He put the gun down, no safety, dog stepped on it. Hunter will survive. Dog unhurt. What if this guy went hunting with the Vice President? Maybe this guy's dog could shoot Dick and leave a pellet or two in the Secret Service detail. That would be funny to the max. Unless someone was permanently harmed. Because as much as we are smart ass 'you didn't mean that to happen, did you?' folks here at JUC, we don't want anyone permanently maimed like, um, soldiers in all those wars.
Posted by Linda Ball at 4:22 PM No comments: