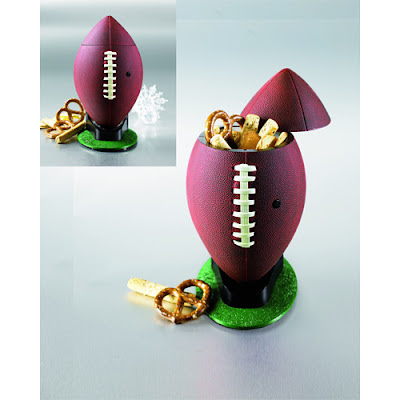 When shopping for others we fall prey to products and product variations that we are unlikely to buy for ourselves. Does anyone really desire a football snack bowl that plays the FOX NFL song? If you do, you're in luck...they've marked it down. The other products designated for JUC's Museum of Questionable products that caught my eye this year (not in actual stores, which I rarely visit, but in ads) were the Pink-colored 22 Rifle at Cabela's and the George Forman iPod Grill. But I guess if you have a diehard fan of FOX NFL on your list or a girly hunter or someone who really needs to have a grill with speakers...you are set for 2007. To me, they seem to be as good an idea as Billy Bass or a Chia Sheep. (Although maybe a Chia Pet is such a bad gift it's good.) In any case, The Journal of Unintended Consequences acknowledges the winter holidays as being a high point for the gift with the unintended consequence of giving the recipient a dose of embarrassment at possessing something.
Posted by Linda Ball at 2:11 PM No comments:

Crazy Cat Lady and A Wealth of Other UCs 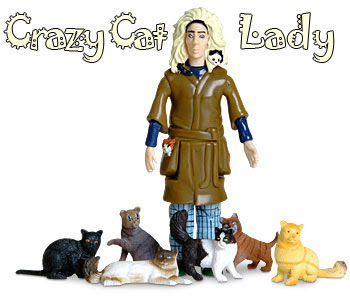 Every year I look forward to The New York Times Magazine when they have the issue that talks about the 'Year in Ideas.' They find some pretty cool innovations but also explore off the wall research and almost always have lots of fodder for a chronicler of unintended consequences. You can mine the whole thing with the link but I would point out the interesting bit of thinking about why "some humans develop an unhealthful attraction to cats and apparently become immune to the smell of their urine." Ah, yes. Unintended consequences for the human, but full of intention for the common parasite Toxoplasma gondii.
Posted by Linda Ball at 2:07 PM No comments: 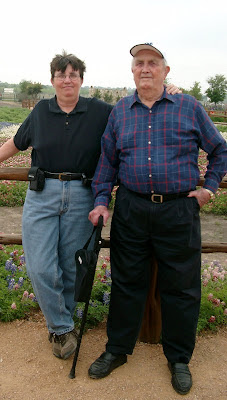 Let's just say: mine is a family with more than one chin issued per person. This photo is me and my dad, circa spring 2003. Those are fields of blooms at a wildflower farm in the background. I might weigh a little less now. I've been exercising assiduously since about six months before the photo.

I read the other day about a little understood phenomena concerning getting us overweight specimens to, um, move it.

Reported in my favorite reference, The New York Times, we have this great headline: Exercising While Overweight Often Ignores the Jiggle Factor. Ha. Ha. (Hear that in the voice of the bully on The Simpsons if you will.) Another reason for the world to laugh while we try to get healthier, huh?

JUC's main interest here is that by telling obese people to get a move on and not dealing with the problem of doing so while toting the fat around may result in injuries and arthritis and further limit the person's exercise options. Basically this article contends that along with the exercise prescription should come the admonition to start with water or recumbent exercise and to watch for this effect. The article also quotes someone as saying that "any soft tissue that is unsupported should be supported." However, that advice is from someone who sells support so I'd take that with a grain of salt. But do try to avoid doing hard with the exercise prescription. I knew there was a reason I preferred the recumbent bike!
Posted by Linda Ball at 4:07 PM No comments:

Don't think that there isn't more than enough input for JUC. We've just been swallowed up in blogging elsewhere. Stay tuned, though, cool material is coming.
Posted by Linda Ball at 4:03 PM No comments: