We Rest Our Case

The New York Times Magazine saw fit to use our very motto as a headline in the January 20, 2008 issue. Yep, they explored the unintended consequences of laws, of governments and religions, and the potential to harm those we were trying to protect. Don't you feel the illusion of control slipping away? Yep, STEPHEN J. DUBNER and STEVEN D. LEVITT (the Steves, let's say) ask "What do a deaf woman in Los Angeles, a first-century Jewish sandal maker and a red-cockaded woodpecker have in common?" How could one not keep reading after the Steves lay down a tease like that? I especially like how they describe attempts to tweak biblical law. Yeah. Hmm.
Posted by Linda Ball at 7:35 AM No comments:

We are so glad that we made it clear here that we were only laughing because everyone survived. Otherwise we would have been more serious about it when the dog shot the hunter. But now a dog in Texas has shot and killed his owner. And it's really sad. They are not absolutely sure the dog did it but his prints were on the gun. The victim bled to death before the police could talk to him and his companion (who tried to stop the bleeding and rushed him to a hospital) was not looking when it happened. This is very sad. Be careful with your guns around dogs and children and other critters.
Posted by Linda Ball at 11:50 AM 1 comment:

Too Young For Strokes 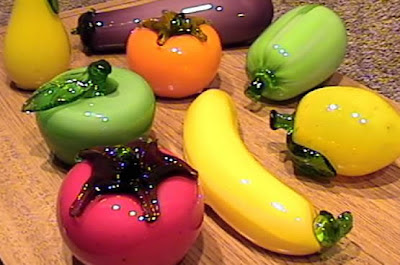 I cadged this picture from an ebay trader long ago. Glass fruit for sale. I once considered having a collection of fake food. I came to my senses. But that's a subject for a different blog.

I wanted to illustrate with fruit because, apparently, a part of the The Beverly Hills diet is to eat fruit only for the first days of the regimen.

The inventor of the diet is dead at 63 from complications of a stroke according to The New York Times. This happened in October so it old news. [This reporter's delay in remarking on it is due to a bad habit of reading papers in a less than current fashion. Also, not the subject of this journal except, you know, to explain the unintended consequence of my remarking on old news.]

The obituary says that she slimmed down from 180 to 108. It would be interesting to know how many times she did that. Yo-yo dieting is bad for you. Some experts thought this diet inventor, Judy Mazel, had invented a dangerous diet. And, well, dead at 63 from a stroke? Seems young to me.
Posted by Linda Ball at 11:30 AM No comments: